The Adventures of Viola Stewart

The Adventures of Viola Stewart – introduces Viola Stewart, a widowed optician with a penchant for detectiving, who stumbles upon a secret Society of Men in Grey. This Victorian Mystery series is set in a steampunk fantasy world and has a gaslamp flavour. Viola’s first three adventures were published May, 2015.

READ THE REVIEWS
Watch the Book Trailers
Buy the books 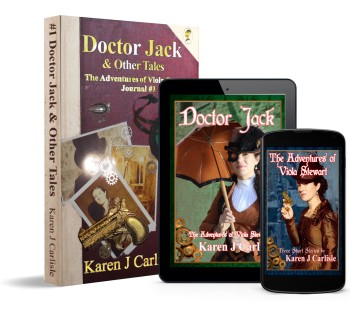 The first set of tales are available separately as eBooks: #1: Three Short Stories (mini-anthology) and #2: Doctor Jack (novella), and as a paperback compilation of all four adventures.

Three short stories and a novella by Karen J Carlisle.

When Viola Stewart’s husband died, she had no wish to wear mourning for the rest of her days. Defying convention, she follows her passion for detectiving and stumbles upon a secret Society of Men in Grey. But peril lurks in the gaslit streets.
Someone is stalking the women of London…
Is Jack the Ripper was being controlled by a secret society, and part of their nefarious plans to take over The Empire?
Viola is drawn into intrigue and secrets that she may take to her grave. Join Viola Stewart, and her good friend Doctor Henry Collins, in a series of Victorian steampunk mysteries.

Journal #2: Eye of the Beholder and Other Tales

Viola is detectiving again, chasing secret societies and nefarious plots.
With Doctor Henry Collins at her side, Viola runs foul of mummies and a murder mystery with a twist.
Is she cursed? Is she going slowly insane? Or has she stumbled into yet another plot of the infamous Men in Grey – a secret society set on taking over the Empire?
With the threat of Bedlam looming over her, she must solve the mystery before it is too late.

Journal #3: The Illusioneer & Other Tales 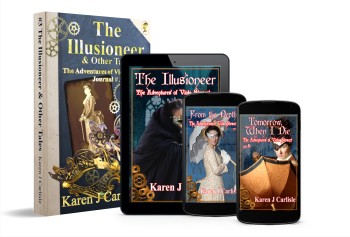 Viola Stewart returns for a third set of adventures.

Viola needs a holiday.
But, even at the beach or on Christmas Eve, there are things afoot. The Grand Tour of Europe starts with the Carnevale di Venezia. A chance meeting leads Viola to Paris, where she is lured into the world of illusionists. Will she finally let go of the past, or will it haunt her forever?
Viola Stewart is back, with both old friends and new. Together, they meet mysterious strangers, ingenious scientists and nefarious anarchists as they pit wits against the Men in Grey’s latest plans of Empire domination.
Seeing is believing… or is it?

Each new adventure is longer! – novellette or novella length.