A couple of weeks ago I spent eight hours of burrowing down the research hole to find details of a specific steamship (London to Adelaide, 1888) for a short story I’m writing for a steampunk/gothic anthology submission. I finally found a Trove article with everything I need, including weather on the trip… 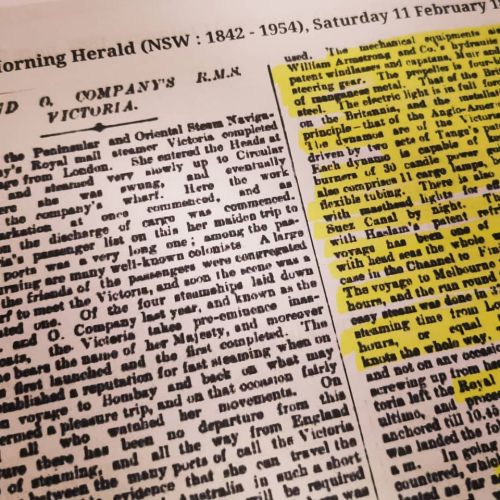 Then realised the ship had electricity… And I’d planned for none. Dang!

Now needed to work out how to hobble the electrics. (It’s a long explanation, with spoilers.  So can’t say why.)

This much I’ve already shared on Instagram and social media… I’ve shared spoilers with my Patreons, in the exclusive Behind the Scenes Video Reward: January 2020 ).

Suffice to say… nefarious things are about to happen  on a steamship bound to Australia, from London. I’m writing it to submit for the upcoming Dreadpunk II anthology; my brief was to write a vampire story, so I decided it was time for a past character to meet their match.  mwah ha ha!

The electrics? If you’ve read my short story, Journal de le Lumiere (published as an extra in the Eye of the Beholder paperback), then you’ll have a hint at possible monsters to be found in this gothic steampunk story. In my alternate/steampunk world electricity is rare. The story is prefaced with:

‘Access to electrical technology is rare and dangerous. Research is illegal throughout the Empire and most of Europe… Buy why?’

This brings me to an upcoming series (in the same world as my existing two steampunk series), The Wizard of St Giles, in which Lumiere is set . The new short is also set in this dark underworld, not seen by the general public. It is secret. It is hidden. It is dangerous. Here be monsters.

And electricty is restricted, at least in (most of) the Empire of Great Britain.

So, I now have to weave the historical steamship’s electricity is into my short story’s plot. I’m still not sure if the I’ll remove the electricity altogether, or not.